Your shopping cart is empty.

The biggest bi-product of the 21st century is not plastic, CO2, or precious metals but rather meta-data. Meta-data provides information about other data, or “data about data.” There are several types of meta-data:

Meta-data is being created every second in today’s built environment. Not just through an occupant’s phone or computer, but also from the buildings themselves via control systems or information portals that assist managers. This meta-data can be analyzed and utilized in parametric modeling within the Architecture, Engineering, and Construction (AEC) industry.

Parametrics has its roots in mathematics and science but in the AEC industry we have a tendency to adopt seemingly unrelated ideas with no correlation to building design and make them our own. Parametrics is fundamental to computation and the foundation of an Algorithm. The rise of parametric analysis’ within our professions can be directly tied to improvements in computer and processing power. This is also the case for digital modeling and simulations in the AEC industry which is why I believe we are beginning to see these two types of design tools being used together.

“Parametric modeling relies on geometric representation of a design with components and attributes that can be parametrically varied, where each geometric configuration that derives from parametric variations is called an instance. Instances represent a unique set of transformations based on parametric inputs, generating design variations and different configurations” (Turrin et al., 2011).

There are two types of parametrics we of primary interest: analysis or simulations, and geometry. Parametric geometry includes building characteristics such as walls, windows, roofs, ceilings, and floors. Analysis and simulation relates to the material specification or scientific properties (i.e., thermal properties) of those building characteristics for determining the impact they will have on building performance. We can specify settings in our simulation programs for determining the impact of non-geometric variables, such as HVAC or insulation. We are starting to see a return to the foundation of computer modeling by using mathematics and scientific methodology to conduct simulations and analyze those results to refine our model/designs. This is evident in our computer modeling software interface and the applications evolution in programs. In Revit and Rhino, the user can now apply material properties, settings, and run simulations within the same program.

The brief history, emphasis on brief, of computer modeling in the AEC industry is CAD (Computer Aided Drafting), 3-D modeling (SketchUp/Solid Works), and BIM (Building Information Modeling) with the most notable being Autodesk’s Revit. For a comprehensive list of programs, you can visit: https://www.buildingenergysoftwaretools.com/

The first paper describing BIM “was published in 1992, entitled Modelling multiple views on buildings” and publications focused on BIM have grown exponentially since then as illustrated in chart below.

The bar graph below illustrates the industry’s overall interest in BIM while the table shows the particular interest of various disciplines within the AEC industry. 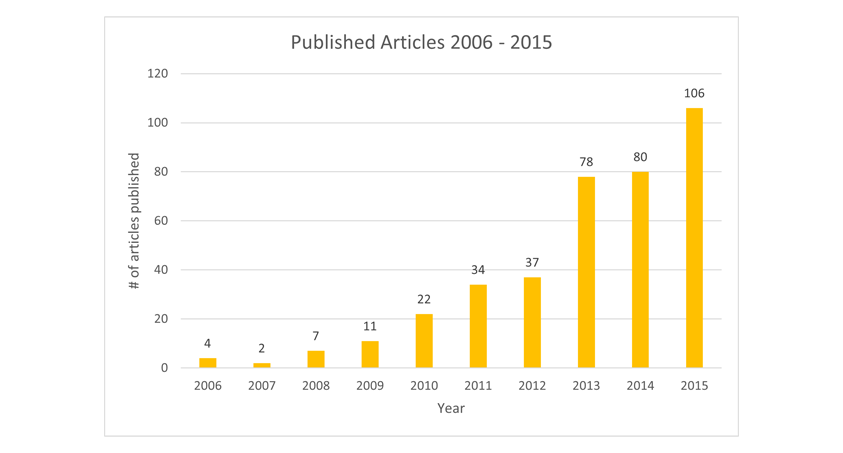 BIM as a fundamental tool of design has seen adoption in most of the leading software programs utilized by Architects and Engineers. However, the way BIM is implemented is heavily influenced by the software program itself. One of the major critiques of BIM is that while it has facilitated progress for an integrated design method, it has done so for only a portion of the industry (mainly Construction). In the Architecture profession, we have seen a focus on an efficient and intuitive user interface for software programs. The Engineering profession has focused on accurate and versatile simulation engines. While individually these software programs serve their intended functions, they fail to communicate collectively with each other. Another dynamic that influences all software programs and the AEC industry in particular is Open vs. Closed Applicable Program Interface (API). API determines if users can change or add on to the program software. “Open” APIs are typically free, user-supported software, whereas “Closed” APIs are typically professionally maintained subscription-based software. The open API dynamic allows for a user or even a community of users to evolve the software’s intended applications into new areas and develop new ways of interacting with the program itself. These types of additions in our industry are referred to as plug-ins.

Almost every major software application in the AEC industry has plugins that were created by users or the parent developers themselves, i.e., Insight for Revit by Autodesk. Sometimes, these are made in response to community demand, or to test a “new” feature before integration as a core feature for future versions. A prime example of this dynamic for the simulation community would be using EnergyPlus, a simulation engine, and interacting with it through OpenStudio, a user interface overlay. Users have also adapted another open-source program, SketchUp, to create entire energy models through 3-D modeling and visual inputs. In addition, users have banded together to maintain, develop, and introduce new users to workflows to utilize the relationships between these software programs. Unmet Hours is a product of this dynamic and has developed into a reliable question-and-answer website for energy modelers to reference. https://unmethours.com/questions/

Parametric(s) is a versatile concept that can be applied to multiple applications in the AEC industry and the figure below identifies the most common.

The greatest impact to a high performance building, or the facilitation of technical integration for building systems, is derived early on in the design process. The further a project is in the design process, the less likely it becomes to change major design or control strategy decisions without significant economic cost. Therefore, information regarding building performance needs to be available to Architects, Engineers, and when applicable, contractors so that they can make informed decisions. For example, what impact will occur if we increase our window to wall ratio from 20% to 35% or adjust our Visible Light Transmission (VLT) percentage so that we can consider daylighting credits for Leadership in Energy and Design (LEED) certification? While we might raise our illumination threshold for the building, we could inadvertently reduce overall building performance in regards to heating and cooling loads.

The real question, in this scenario, is how much can we increase our window to wall ratio before we see an adverse impact on our heating and cooling loads? To answer this question in a multitude of scenarios, and within a time frame that is acceptable in the design process, we can utilize parametrics. The nature of parametric(s) can be infinite in possibilities and as much as I hate to say this, there is such a thing as too much data. Which is why we apply variables with ranges to interpret the data that allows us to make decisions or arrive at conclusions for analysis. This method creates minimum and maximum allowable scales of impact for selective variables, i.e. Window to Wall ratio, VLT, or Insulation. We can provide designers with these ranges to have their building design operate within these boundaries and respond to design decisions as it relates to the impact of building performance.

In all simulation software programs, there a minimum threshold you must meet in order to run a simulation, i.e., you must have a space defined by having a floor, walls, roof, etc. This is also true for programs that do not have a 3-D modeling visual interface which are more commonly referred to as ‘engines’. These programs are often focused on one aspect of performance design and they lack the ability to accurately export or import data from other programs. The requirements for software programs to ‘run’, as well as compartmentalization, has had a significant impact on professionals to utilize these programs with the most common reason cited as “I don’t know what to select for these options and I could get bad results.” There has been a response by the industry to implement “Best Practices” or give users a list of defined options so they can get started. This can be considered a more official or certified version that communities have developed, commonly referred to as workflow methodology, to assist in utilizing the program.

“The most common method of integrating building performance simulations (BPS) into early design work has been by exporting the design model to a dedicated analysis tool to generate an analysis model, assign inputs necessary for calculations and simulate energy usage, daylighting, or solar radiation.”(Aksamija 2018) The following table shows the basic setup for integrating parametric and performance-based design.

GIGO - Garbage In, Garbage Out

As mentioned earlier, using parametric(s) in design can result in multiple and large data sets which can be overwhelming, hindering the design process. One way we at the Integrated Design Lab deal with this problem is through the principle of GIGO, where data integrity is crucial to generate accurate results. GIGO, or Garbage In Garbage Out, is the principle that if you start your experiment with faulty data or assumptions, the results will also be faulty. While the ability to “produce many instances that result in unique configuration of the same geometric component is the main advantage of parametric modeling,” it requires a clear hierarchy to generate an optimal model or hypothesis to navigate the results from your simulation. In other words, what goals are you trying to achieve, as well as the methods that will be used to investigate the actions required to achieve those goals. A parametric model is capable of coordinating meaningful properties through constraints such as Design, Structure, Performance, Orientation, or Control strategies. The same is also true for a parametric analysis, however, these parameters can be used to add intrinsic value to a decision. The intrinsic, or estimated value, allows designers to provide evidence and justification for various design decisions.

In an ideal world, integrating parametric modeling with building performance analysis methods would allow architects or designers to visualize and weigh design decisions about a building’s performance from the onset of early design. It would also assist in identifying multiple design strategies in an efficient method that also reduces the time required for modeling and analysis as an ideal benefit of integrated performance centered parametric design. Not to be deterred, the AEC industry’s development of best practices, community forums, and plugins are trying to achieve a data driven design process which is often referred to as Integrated Design.

In my presentations I like to present an interesting fact about the history of the topic. So I would like to introduce you to the first computer programmer.

Known as the earliest computer programmer in the world, and that too the first woman to have achieved this feat, Ada Lovelace is known for her mathematical works in collaboration with the "Father of the Computer", Charles Babbage.

After earning a Bachelor of Science degree in Architecture from the University of Idaho, Moscow, Dylan studied the science and engineering of building design by completing a Master's degree in architecture. As a student he worked at the Integrated Design Lab and gained hands-on experience in the practice of Integrated Design. As an IDL Research assistant, Dylan worked with both the architectural and engineering side of integrated design, providing a broader opportunity to cross over fields of study. He started working on real world projects at the Lab in the spring of 2015 and, graduated with a Master's of Architecture in Fall of 2017 with an emphasis in urban planning and net-zero/energy efficiency building design. Shortly after graduation Dylan began working as a Research Assistant at the IDL and has since been working on a wide range of projects from Energy Modeling to Daylighting Design.